You'd think that choosing a yoga towel would be easy...

It turns out there are a lot of small things to watch out for. Everything from the grain of the microfiber down to picking the right size, it can be pretty involved.

If you are looking for the best yoga towel for your budget I've complied this list to ensure you find the right one. We'll also answer a few questions so you can have a good understanding of what exactly you need.

Let's start off with the best right away...

Surprisingly it does not have the rubber grips on the bottom of the towel, but it turns out that’s not necessarily needed. The microfiber does a really good job itself of keeping everything in place where it should be.

It’s also machine washable and it won’t shrink! As a bonus you get a discount when you order a few at a time!

What Is The Point Of A Yoga Towel?

Having a towel specially designed to fit over your yoga mat is helpful in not allowing you to slip and slide when you begin to sweat.

Those whose hands often slide in Downward Dog will enjoy having a yoga towel because it helps you stay grounded and focused, rather than being annoyed that your hands are slipping every two minutes.

Here’s another towel that almost got first place…

This will fit nicely over any standard size yoga mat. It’s 26.5 x 72” so you shouldn’t have any issues with its size. Once again there’s no rubber grip on the bottom, but that’s not always needed.

The grips on the bottom of yoga towels are good for when you want to use the towel alone as a yoga mat. This is nice if you practice at home on the carpet. Nonetheless, this is a fantastic towel, that washes easy and retains its shape.

You’ll pay a tiny bit more, but it’s worth it…

The Manduka eQua Towel is a good towel to prevent you from slipping due to it’s microfiber design. It absorbs sweat fast and keeps you sturdy on your mat.

In my humble opinion it’s worth it to go with a company like Manduka because of their strict ecologically friendly manufacturing process. Other towels on this list may do a good job, but they are not as planet-friendly as Manduka.

​What Is The Point Of A Yoga Towel?

Having a yoga towel does a few things for you. First, it helps with grip when your mat starts to get wet. Second, it prevents your mat itself from getting soaked. It’s much easier to clean a towel than it is to clean a mat.

Lastly, as you become more advanced it provides a unique texture and surface to glide and transfer into various poses a bit more smooth than you would if you were on a bare yoga mat.

This towel has massive grip on the mat…

The silicone bottom layer with tiny little stoppers will ensure that your towel stays exactly in place and won't move an inch.

Some people say the little stoppers on the bottom are helpful, and others find it annoying. It all depends on feel. Some say it can mess with your grounded feel of being on your mat, while others say it’s the best feel ever.

A stand-alone reason this made it on my best yoga towel list is because of the ability to use it as a mat. It’s ultra thin, has good grip, and works pretty well on carpet.

In Case You Were Wondering

Back in 2013 Manduka actually acquired YogiToes in an effort to have more market share. So if you were curious as to if YogiToes or Manduka have the same towels, the answer is - yes, kinda.

YogiToes will have the grip on the bottom and Manduka typically makes it’s microfiber towel.

Here is another standard microfiber towel that works well…

There’s only one small catch however, and that’s the size. This towel is only 24” wide. Now while most yoga mats are also 24” that doesn’t seem like it would be an issue at first.

If you classify yourself as being “type A” or as having, “mild OCD” then the moment a small bit of the towel shifts and exposes the mat underneath, it’s going to bother you.

I like having a towel that is 26” wide so it gives me a bit of wiggle room when lining it up over my mat. If seeing your mad under your towel once every so often won’t bother then you then this is actually a really good yoga towel.

​How Often Should You Wash Your Yoga Towel?

Washing your yoga towel all depends on how much you sweat. If you do hot yoga 5 times a week and you sweat a lot then it may be a good idea to have 5 yoga towels just so you don’t have to do laundry every day.

If you have a yoga towel for room temperature classes where things aren’t as intense, you’ll want to aim to wash your yoga towel about as often as you would wash one of your shower towels.

This is another basic microfiber yoga towel, but it comes in all sorts of cool colors!

If you enjoy a splash of color on your towel then SUMI has lots of fun options to choose from. Anything from lime green to tie dye.

This towel is only 24” inches wide so keep that in mind. It won’t shrink when you wash it, but if you have a mat that’s slightly larger than 24” you’ll end up seeing the edge of your mat underneath.

I’ve known some students who do yoga to wrap their big yoga bolster in their yoga towel to help keep the sweat off of their bolster. Yoga towels are much easier to wash than a bolster cover, so keep that in mind!

​The stitching is what attracted me to this towel…

Some towels can actually have bad stitching around the edges. After a few uses and washes it starts to fray and come unraveled.

This yoga towel by REEHUT has fantastic stitching around the outer edge. Furthermore, the microfiber count of this towel is really high. Some towels you get just seem like they are too clumpy, but not this one.

Can I Use A Regular Towel For Yoga?

You can use a normal towel or a beach towel for yoga, but don’t expect it to perform as good as a microfiber towel designed especially for yoga. A regular towel will cause you to slip more and you’ll have to spray it down with a lot more water than normal just to have good traction.

This would be much higher on the list if it wasn’t for one small thing - the size.

Their “StichyFiber” technology makes it really good at sticking to your mat, but the overall size of the mat needs to be just a bit wider. Again, at only 24 inches you may find yourself needing to re-adjust your mat more than you would like to.

This is only a half size towel, but it really good.

This towel will cover the width of most yoga mats, but not the length. It’s only 4 feet long so you will most likely keep it at the front or back of your mat.

I really enjoy having a smaller towel. I can fold it up real quick to use as padding for one of my knees, quick eyebrow wipe, or even a small pillow for shavasana.

This towel is perfect for those who only need a towel every so often in their practice. It’s for those who want to use their bare yoga mat most of the time.

Which this brings us to another important question...

What Size Yoga Towel Do I Need?

The best option is to find a towel that’s one to two inches wider than your current yoga mat. Some yoga mats are intentionally wider than the standard 24 inches so finding a towel that fits over that size would be difficult.

Sometimes you’ll find that a full size yoga mat towel is just too much. You may not actually sweat that much to justify needing a big towel. This is when small towels like these shine. You can still enjoy the feel of your yoga mat, without worrying about a towel getting bunched up under your feet.

Why not get both?

This would be for serious sweaters… If you want to have a towel to catch all of your sweat on top of your yoga mat and you need to constantly reach for a towel to wipe your face then this is the set for you.

Furthermore this towel is a bit thicker than most other microfiber towels. This is good because it will still provide traction without having too much of that mushy feeling when things get really wet.

If you want ultimate grip with the best size possible then go with the YogiToes non slip towel. It stays in one place and is super helpful for keeping you from slipping.

Those who need just a little bit of help may want to check out the half size towel from Shandali. It’s an easy solution for those who only need help with sweat and slipping once in a while.

Do you have a specific yoga towel you enjoy? Let me know in the comments!

"The Beginner's Guide To At-Home Yoga" 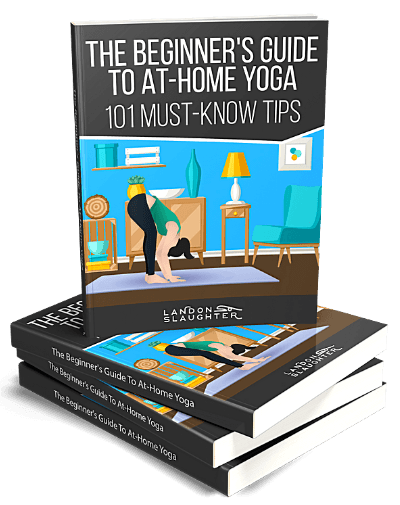 Enter Your Email Below To Gain Instant Access To:

The Beginner's Guide To At Home Yoga